An Introduction to Poole Harbour 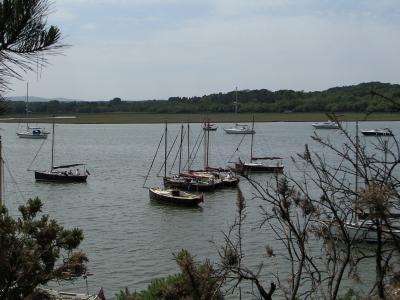 Poole Harbour is one of the largest natural harbours in Europe and provides a safe haven for sailors in any conditions. Its local High Water stand, shallow navigable channels and abundance of anchorages make the harbour ideal for shoal draft boats. No surprise then that Poole is the home port for over 70 Shrimpers; currently the largest keelboat class fleet in the harbour.

The harbour is bounded on its west side by the Purbeck Hills and to the west and north by Dorset heathlands. On the east side of the harbour can be found the town of Poole and its environs. There are 5 islands within the harbour, the largest being Brownsea Island which belongs to the National Trust. There are also many creeks and inlets, within which the salt marshes and mud flats sustain a wealth of birdlife. All good ‘Shrimper country.'

The entrance to the harbour is narrow, with Sandbanks peninsular to the east and Studland to the west. The tidal stream can run at up to 5 knots on the spring ebb in the entrance. A vehicle chain ferry runs between both sides and a local byelaw gives the ferry right of way over all non-piloted vessels.

The coastline westwards from the harbour entrance is stunningly beautiful and has recently been awarded World Heritage status. Studland is also the start point of the South West Coastal Path that runs for over 400 miles to Minehead in Somerset. To the east towards the Solent lie Poole Bay and Christchurch Bay, with the seafront of Bournemouth spreading as far as Hengitsbury Head.

The harbour is home to 8 yacht clubs, with Shrimper representatives at every club. However the main fleets are at the Royal Motor Yacht Club, Parkstone Yacht Club and Poole Yacht Club. There are also 10 boatyards in the harbour. 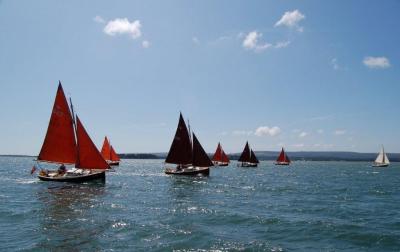 Visitors trailing their Shrimper to Poole will unfortunately find only one public slipway, at Baiter, just east of the Town Quay. However by prior arrangement, usually through a local Shrimper owner, it is possible to use the slip or hoist at one of the local clubs or boatyards.

Full article:  However, for the academics, as many of you know, Poole has unusual tides when compared to most of Britain.  Visitors to the harbour are often puzzled by the small tidal range and double High Waters.  Indeed, why should Poole enjoy double High Waters, when a few miles west Weymouth suffers double Low Waters.  Well, thanks to some useful information passed on from the U.K. Hydrographic Office, we will attempt an explanation.

Double High and Low waters occur in the vicinity of nodal points of the main tide; a nodal point being where the size (range) of the tide is very small or nil.  Admiralty Chart 5058 shows the entire U.K. with lines drawn to show places of equal tide range and tide times.  Surprisingly, the chart reveals that there are about half dozen locations around the coast where there is little or no tidal range.

In other words, the tidal stream might very well flow one way and then the other, but the actual height above chart datum remains constant.  Poole is one of these locations.  Others can be found in the North Sea and at either end of the Irish Sea.

Poole happens to be close to a nodal point, owing to its position approximately halfway between Lands End and the Dover Strait.  In the English Channel there occurs a ‘Standing Wave’, rather like the wave you get by slopping water about in a bath.  The pivot point of this wave is in the vicinity of Poole.  Hence there is a Mean range at Poole of 1.6m Springs and 0.5m Neaps, as compared with 3.9m and 1.9m respectively at Portsmouth.  As you move away from Poole, so the size of the tide increases.

With it so far?  Good!  Now let us complicate the matter by introducing friction. In shallow water, friction causes a distortion of the tide in such a way that it introduces another ‘standing wave’ into the cycle.  A tidal graph will show it as a second ‘blip’ on the curve.  However, when the main tide range becomes small, the frictional effect distorts the tidal curve more and more, eventually producing either ‘double high’ or ‘double low’ waters, depending on the phasing of the tidal curve.

Strictly speaking these are not ‘double highs or lows’ but a dimunation of the normal twice daily tide cycle.  Where the semi-diurnal tide range is small, any shallow water tide effect remains a constant.  Hence during neap tides at Poole, the tide is mostly due to shallow water tide constituents.

Poole Harbour consists of a large basin with only one entrance. As described above, the tidal stream is mainly quarter diurnal.  In other words the stream at the entrance ebbs and flows 8 times per day as opposed to the normal 4 times per day round the rest of the coast.  Though the tide range is small, even at springs, the quantity of water that must run out of the harbour to empty it is very great indeed, which accounts for the strong tidal streams to be experienced at the harbour entrance.

So you see, the explanation of the Poole double tides being a result of two separate tidal waves reaching the area, one from the east and one from the west, is entirely untrue, as is the story that the Poole tides and indeed the Solent anomalies are due to the presence of the Isle of Wight.

Hope this helps and it may give you something on which to ponder, whilst firmly on the mud in South Deep or one of the other Shrimper ‘traps’ in the harbour.