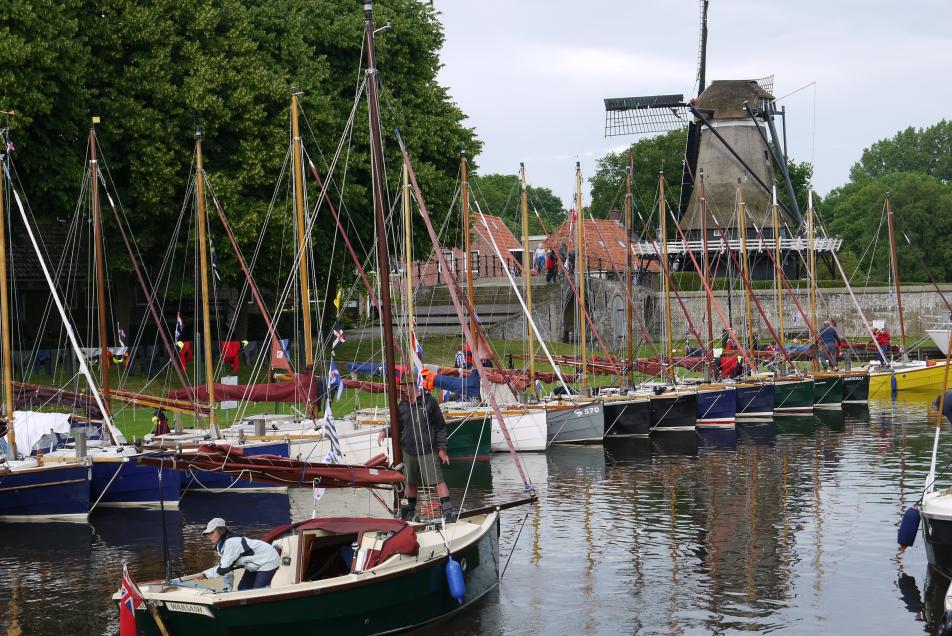 Our local Regional Honorary Secretary is Harry Breuking. Harry can be contacted at

"Sailing in Holland is very different from the UK; coastal sailing is very limited, the North Sea coast is a straight line with few harbours; on the other side we have an abundance of fresh water lakes and rivers with a very good infrastructure (trying to keep the seawater out!)  Many waters are shallow (hence  the many flat-bottomed boats with their leeboards), and with lots of waterside pubs and free pontoons make them as one owner put it to me a Shrimper Eldorado!

Unlike the UK in Holland most sailers are not organized in sailing clubs. When I bought my Shrimper I had no idea of the existence of the SOA. When the previous owner told me about it I became a member and joined the ISW in Brest in 1996. We loved it!

Together with some friends we started the Dutch group.

We put an advertisement in the “Waterkampioen” for interested owners to join in.

There were quite a few reactions. A striking feature was the large number of owners with a medical profession.  Some close friendships have developed from this first group of Dutch Shrimper owners. Joint sailing weekends have also been organized. But the number of Shrimpers in Holland has always remained small (about 50); here it was seen as a charming but expensive boat with a lot of competition, and the importer of Cornish Crabbers often changed. A number of Dutch Shrimper owners from the beginning have dropped out, and the desire of new youngsters to organize themselves is less strong nowadays.

Every year a delegation of several Dutch boats participated in the ISW both in the UK,  like East Anglia, Falmouth, Poole, Chichester, Scotland, Wales and Denmark and in France (Brest, Morbignan, St. Malo).

Since then we have made a lot of Dutch and English sailing friends, and we have sailed in areas where we would never have gone by ourselves. We always felt complete thrust in the organizers and the Shrimper!

We organized the ISW 5 times, three times in Friesland and twice in Zeeland.

The first time was in 1998, no mobile phone, no internet! Everything was done by post or by fax. It was a great success, including giving instant cycling lessons to the wife of Hugo Avigdor from Italy!

I think the ISW gave a good opportunity to show the beauty of the Dutch waters; owning a Shrimper and partaking in ISW gives so much in return".