The 'Flagship' event of the SOA calendar, usually held in June each year, when Shrimpers from all over the UK and Europe gather to sail in company and meet up with friends old and new whilst exploring new and interesting locations.

There is a great feeling of camaraderie on these international rallies, often as a result of sharing joint experiences.  But along with the fun, the adventure and exploration, owners also learn a lot about themselves and their boats when sailing with other Shrimpers. Those with less experience appreciate the extra degree of security of sailing in company, especially in conditions that crews might tend to avoid if on their own.   The experience only adds to the confidence we feel when sailing our remarkably seaworthy Shrimpers.

Our rallies have been held in many different locations over the years. These are listed below and clicking on the location will (in most cases) take you to a log/report prepared by a participant: 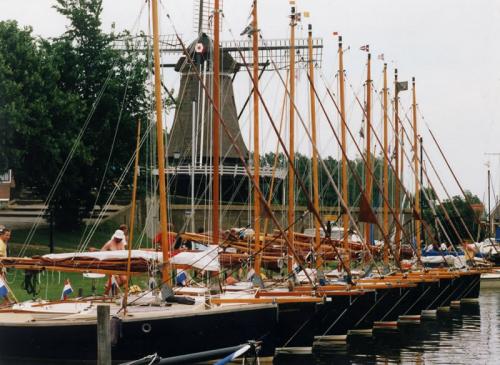 The usual format sees an organised first week (or longer) providing interesting day cruises under the guidance of local owners who have the vital 'local knowledge'.  During the the organised first "week" a day is usually set aside for those keen on racing to compete for the Shrimper Challenge Cup ( See Shrimper trophies )

At the end of the week there is a Prize Giving supper where there is always much enthusiastic discussion about the week's adventures and during which prizes and trophies are awarded, including the Challenge Cup.

Crews often stay on after the organised event to further explore the area, perhaps revisiting locations or moving on to new areas and different harbours. Thus is generally of a more relaxed, low key, affair with owners doing "their own thing", usually in smaller groups.

Every SOA Member is invited to attend ISW, but be sure to get your entry in early as spaces are generally limited.